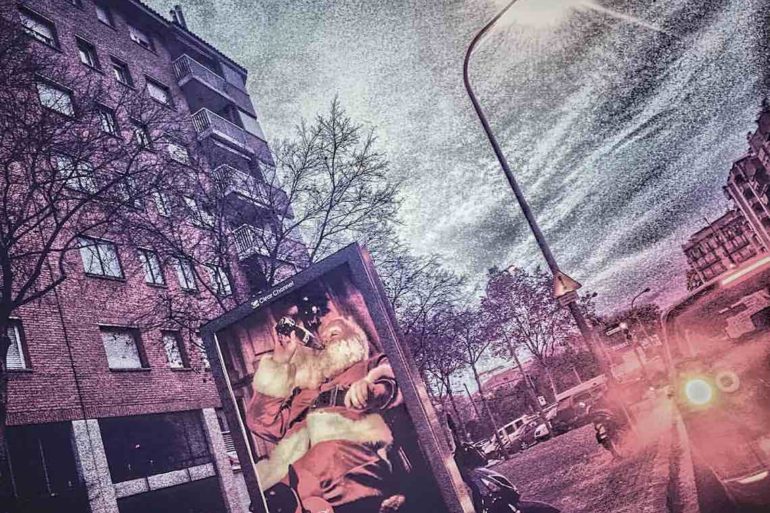 Santa Claus does not exist already

This morning a white-bearded fat man, dressed all in red, wearing a black belt and black boots and looking like hot wine a lot, has stolen the dreams of every child on the planet. Later his legal representative, Ebenezer Scrooge, an elderly executive of British origin, has stated that he has not only stolen children’s dreams, but also those of adults, who, despite their ages, still have the soul of a child. The statement has been issued from an unknown location in the North Pole, where it is estimated that those dreams are collected under the continuous vigilance of malevolent pixies, dressed in green and with long ears, that allows them to hear all the mischief of children and not so kids on the planet. These pixies are known in the area as the “Santa’s helpers”.
In fact, this morning the most important cities of the planet have lived a wave of disappointment and disappointment that has plunged the inhabitants of the city into a great consternation and depression difficult to overcome.
Medical services have waited for hours at the doors of hospital services, hoping to receive potential patients for urgent treatment, and to collaborate in the healing of this damn global pandemic, but, in the end, they were also disenchanted and frustrated, not only because no one ever came to be treated, but because in the end they no longer expected anything from anyone as people. Apparently, the medical scientists have also lost all hope of recovery and sanitation of the human species.
Citizen security services have proven that the dreams of a large part of the population have been burned a posteriori and the illusions of these inhabitants of the planet have been dynamited in secret. Consequently, a great wave full of negativity and violent attacks full of anger and hatred, overflowing with anxiety, are shaking the cities of the planet. The official authorities have reported, in urgent communications to the population, issued from their headquarters armored by blocks of gold and diamonds, that we are certainly facing a great world catastrophe, in which hardly governments dare do anything for the magnitude of the tragedy. The situation is out of the hands of the high commanders of the planet, and it is no longer a matter of conflict zones, or armed areas where the intervention of law enforcement is difficult to apply, this situation goes further and is of a situation of extreme delicacy by the depth of its wounds and consequences in the values of the humanity. This is one of the most serious crisis experienced in the history of mankind, and is that without a doubt, after everything seen, Santa Claus has given to understand that Christmas no longer exists, so, according to a statement issued from his Head office in Laponia, has proceeded to take precautionary measures with the sole purpose of preserving the true spirit of Christmas, in the hope of future generations to act accordingly to recover it.
The latest news in this regard is played by Rudolph, the eternal companion of Santa Claus, who has said that Santa Claus is not willing to return dreams and illusions to their owners until they do not change their attitude and feel the true love between them And the spirit of Christmas.

No doubt, Santa Claus does not want to continue to exist in a world like this.