Edicions Viena surprised us all with the publication of “Petits Plaers” a new collection of short novels, from classic authors of the nineteenth and twentieth centuries, with a totally cured and transportable edition everywhere, that surely will be love at first glance for the most bibliophiles and demanding readers.
Among these classic authors, we find the Japanese author Junichirō Tanizaki (1886-1965) one of the Asian authors who combines most ancient Japanese tradition and Occidental influences with more strength. Tanizaki writes with absolute beauty about human relationships and is an author of almost obligated reading if we want to discover the classics of Japanese literature, especially if we also consider that it was censored at the beginning of the 20th century to deal with issues such as fetishism, sadomasochism, travesty, or cruel and destructive relationships, as described in “A Portrait of Shunkin” .

The short novel “A Portrait of Shunkin” has been included in the “Petits Plaers” collection of Vienna Edicions, and tells us the relationship between two central characters: Shunkin, a wealthy girl from Kyoto, and Sasuke, her servant, through a love story between both.
Junichirō Tanizaki uses a narrative voice external to action to tell us the story of love: “The details that follow, which naturally do not appear in the Biography ...” (p.72), and, sometimes he plays with who read, calling into question that what he narrates became true or not, causing a slight sense of mystery in the reader.
Even so, the narrated relationship is a perverse love relationship where Sasuke, as a loyal servant, is constantly humiliated by the Shunkin, while Sasuke remains completely faithful to serving his Mrs. Shunkin, beginning with the passage of time a relationship of love between the two that reaches the moment of maximum happiness when Sasuke become blind, just as Shunkin has been alive: “Sitting in front of the other in silence, Sasuke noticed how inside he was beginning to develop the sixth sense that only the blind people had, and he could guess that in the heart of the Shunkin there was only a feeling of gratitude. […] But now in Sasuke he noticed that the heart of the Shunkin and his one of him were united for the first time and moved in the same direction “(p.120). 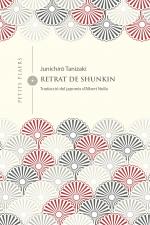 “A Portrait of Shinkun” was written by Tanizaki in 1934, a story where we feel the atmosphere of the Japanese tradition that is totally present, but we can also feel the search for women’s freedom, which is most characteristic of the Occidental world:  ” I told you last year that I do not intend to marry me “(Page 64). Tanizaki describes Shunkin as a selfish, ill-tempered, ambitious, and at the same time radiant beauty that manages the poor and humble of Sasuke, with his humiliations and psychological abuse.
At a final moment in history, the Shunkin suffers an accident caused by a punctual secondary character, which the reader does not know who could be, but who the author presents as a possible enemy of the Shunkin for his social success, as a music teacher and as a woman with an outstanding beauty: “She herself had planted the seeds of her own misfortune” (p.110) and that triggers in the Shunkin an aggravation in her complexity of inferiority and an aggravation of the vanity of beauty that the female protagonist presents throughout the plot, to the point that induces him to suffer permanent blindness as well. Tanizaki thus discovered the reader a much more perverse and selfish Shunkin than initially presented, and a poor Sasuke reason why the reader was feeling compassion. Here is a magnificent Tanizaki, where with a very simple Japanese history, but at the same time, very deep, it reflects the reader about, not only the cruelty but also on the power and beauty of the force of the love.
With the publication in Catalan of “A Portrait of Shunkin” by Junichirō Tanizaki by Edicions Viena, translated exquisitely into Catalan by Albert Nolla, we will delight ourselves with a classic story, in this case of Japanese literature. A totally representative plot of the narrative of Tanizaki, which through a literary quality transmits a love story with bittersweet taste, but that with the attractive presentation format chosen by Edicions Viena continues to respect the quality that we are accustomed to the editorial, and that allows us to continue enjoying pleasure from the reader with the collection that honors his name “Petits Plaers “ ( Small Pleasures) , not only for the selection of quality classics and new feature films selected but also for Its small and attractive presentation format.