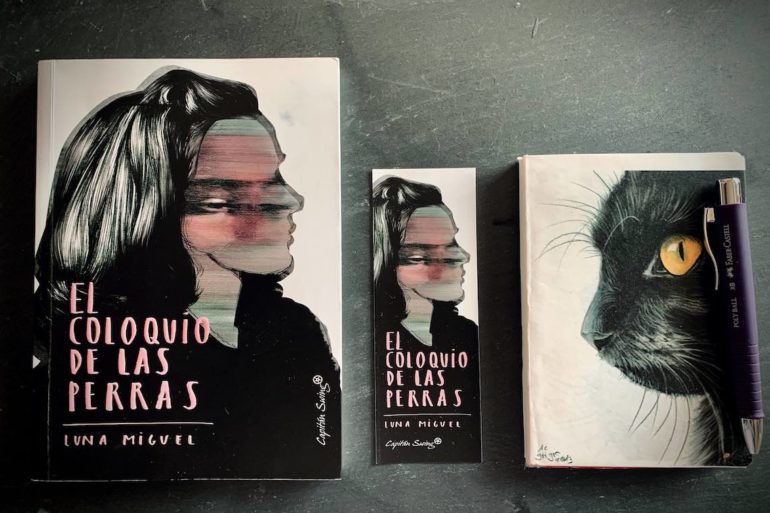 I have always defended the idea that literature has no gender. The author male or the women author writes, and the reader reads the work, of course, the genre should not intervene to be a more or less interesting work, of greater or lesser quality. However, there are moments in history or in certain social situations, which seems to be that literature should have gender, or at least, it is a relevant circumstance if the author is a woman or a man.
If we also face unfavourable situations in which for the sole reason of being a writer, that is: woman writer, your literature is devalued before the work of the writer man, then we do have a problem and unpleasant ones, in which I position myself, not only as a woman but also as a writer, in favour of supporting the silenced writers and denouncing the injustice committed at the time, by the fact of being an unjust act of violation towards the person.
Luna Miguel, has collected in his literary essay “El coloquio de las perras” (Capitán Swing), a compendium of Spanish-American writers, whose work is of outstanding literary quality, but which, however, have been violated and silenced by the simple fact of being women Many of them went down in history for being “woman married with …“, and what a coincidence that this “with …” was followed by a famous writer’s name, including a Nobel Prize writer.
The renowned and acclaimed writer Luna Miguel has been the one in charge of this work of great literary responsibility, but also of a perfect sorority. Luna Miguel has given visibility to the unrecognized literary work of these silenced authors, expanding the range of Latin American literary references, since Luna Miguel in this essay has compiled Spanish-American authors (novelists, poets, short story writers, translators, essayists …), all of them with texts of notorious literary quality, and has been responsible for destroying that network of silence that covered most of them. Thanks to Luna Miguel’s essay we have known brushstrokes and difficult realities, such as those experienced by writers such as Alcira Soust Scaffo, Eunice Odio, Maria Emilia Cornejo, or Aurora Bernárdez, whom Luna Miguel refers to in her book; We have also been able to delve into the realities of other Spanish-American writers, equally ignored, but who, over the years, and due to the forcefulness of their work, managed to break that literary glass ceiling built by male writers, if only as far as Notoriously, they were authors like Pita Amor, Gabriela Mistral or the poet Alejandra Pizarnik. But, as Luna Miguel indicates, it took many years for them to get recognized, some even did so posthumously to his death.
Last Tuesday, January 14 at the Llibrería Synusia in Terrassa, I had the honour of conducting the Literary Colloquium that we created around the book “El coloquio de las perras” by Luna Miguel. We share the stage with the same writer, Luna Miguel, as well as Isabel Marqués, Sindica de Greuges de Terrassa, Almudena Almagro, Writer and President of the Association “Amunt Dona, Creant Realitats” and Katiuscia Darici, Associate Professor at the University of Verona and Doctor in Hispanic Philology. The act was enlivened by the acoustic and live music of the Austrian singer-songwriter: Lisi4u.
It was a moment of debate and joint reflection, between attendees and the table of speakers, around feminisms, but also around women as professionals, and above all around quality literature and the different realities that as authors and women had to live some of the authors like Aurora Bernárdez, Marvel Moreno or Victoria Santa Cruz named and also studied in the essay “El coloquio de las perras”. During the debate, we not only point out new bibliographical references of authors mentioned by Luna Miguel, writers who were also silenced, in addition to those studied in their book, but also with Luna Miguel we radiograph the current “male author” and point to the new literary trends to which literature points, closer to a literature without gender, “literature understood as trans” as mentioned by Luna Miguel, more than a literature where the male or female gender of the author interferes with the work.
After working on reading and analyzing in-depth the book “El Coloquio de las Perras” by Luna Miguel, I recommend reading it, especially to those people who are interested in discovering new and valuable Hispanic-American, Hispanic-American voices. writers who silenced the immense quality of their work. Luna Miguel gives us a description of how their lives were, some personal anecdotes of the writers, but also addresses them, through a letter, fully personalized for each of the silenced authors, where Luna Miguel confers his thoughts from writer to writer, a total act of literary solidarity, but also of brotherhood among women writers.
Congratulations, Luna for this very interesting book that opens the eyes of readers to the sad reality that authors such as Rosario Ferré, Elena Garro or many others mentioned in her great book “El coloquio de las perras” should not have lived (Captain Swing Editorial ) for the simple fact of being women and doing quality work.