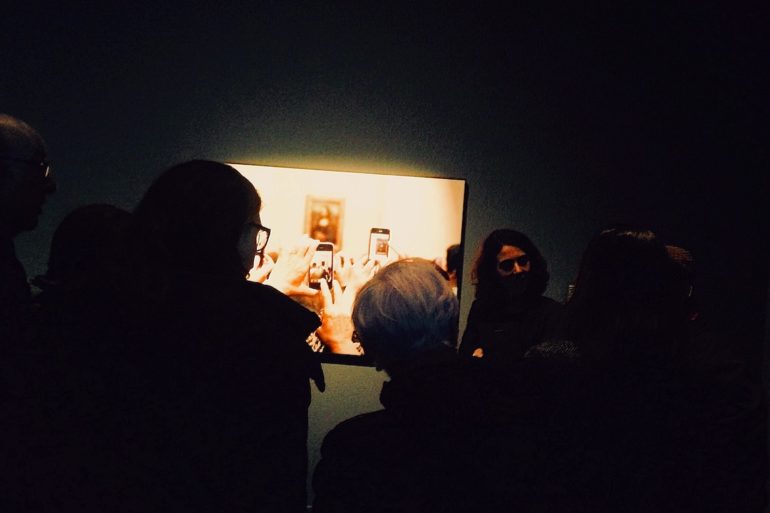 This exhibition takes as a symbolic starting point the theft of the Mona Lisa that took place in the Louvre during 1911, to deal with issues that have to do with the generation of strategies of opacity and resistance to the visual regime, but also deals with the way in which we currently observe the images.

While it is true that contemporary art becomes a ground for reflection and the rise of thought, for me this visual experience makes us reflect on what really generates the darkness of the absences and the trace that these absences cause in the mind of the person.

The fact that the exhibited works are works that denote some resistance to be contemplated easily, are works of art that hide some of the parts of the exposed object or hinders their vision completely, which provokes in the viewer the use of imagination to being able to contemplate them in its entirety, makes me relate it to the value that absences and presences take in the person.

For example, it makes me think of the same situation that occurs when we feel the emptiness represented by the absence of a person, or we endeavor to imagine it present, either through illusion or memory, or we abandon ourselves to accept that absence, accepting it finally as absent and therefore non-existent why it is not present.

At the same time, the exhibition “A certain darkness” also presents a point of criticism to the treatment of the contemplation of works of art at present, and how, with the evolution of technologies and also of the treatment of time, the views of the spectators towards art. A distinction is made here between the value of the cult of the image and the value of the exhibition, since although formerly, the presence of art was valued much more, its existence, nowadays, is valued much more its exhibition and rotation so that they are accessible to the more spectators better. This implies, in an extreme sense, that the images are not contemplated with the ritual of admiration or impact that supposes the mere fact of contemplating the art, with the time of observation, and, perhaps, respect and admiration that each work of art can entail. art, for what it provokes or can make us feel with its presence, but now art is instantly underestimated by anxiety with concern to spread and make it more present and accessible to the rest of society. Really, with the desire to spread, share, rotate or simply photograph their presence with the intention of keeping them intact in memory, what we are doing is simply the opposite, treating the work as absent, because we do not denote the fair value that it needs its presence and that is when we even ignore it, once its existence has been perpetuated, absence again being generated, by the fact of valuing it as if it were not present before us, as if it did not exist.

The exhibition extends the exhibition to a series of proposals and materials that are located outside the exhibition space, outside CaixaFòrum, where the exhibition takes place, and places it in different spaces of the city and also of cyberspace, according to the organization. dissemination beyond the physical and contextual limits of the exhibition hall is related to the movement of the Mona Lisa when it was stolen from the Louvre, as well as its secret existence during the time it remained hidden. For me, on the other hand, it is the continuation of a game of presences and absences on which the whole exhibition is based, provoking that certain darkness that all the absences that we would want were presence leave us.