Umbriel Editores has published in Spanish “A deadly education” by Naomi Novik, a book that is the first volume of a trilogy, perhaps for this reason this first book has the aftertaste of presenting a plot much more complex and greater than the one we read in this story introduction to the world that Naomi Novik proposes us.
In “A deadly education” we are going to meet a girl who has far superior magical powers, so she goes to a magic school, the “Schoolomance”, to learn how to perfect those powers.
It is then that the narrative voice in the first person tells us about her life: Galadriel “El” Higgins, a half British half Indian witch who attends training at the Schoolomance, a magic school where the consequences of any mistake could mean death immediate; It also tells us who Orion Lake is, an exasperatingly nice kid who wants to save everyone and everyone thinks he is a wonderful hero. Of course, she can’t stand Orion, and she wants to stay away from him, but apparently, they are destined to meet. The constant bickering between El and Orion creates hilarious moments; The protagonist also tells us about her relationship with her mother, who by the way also has powers like her, but unlike her, she only uses them to help “worldlings” to be happier in the purest new age style. The protagonist also tells us about the importance of some quartz that belonged to her mother, and that “sneaked” into school because they contain a kind of special energy, “manà”, which makes her reinforce her powers and thus be able to be stronger in the face of any defence or magic attack.
During the narration, we are faced with detailed descriptions of how these magical spheres work, in which there is a cruel void, in which any schoolmate can make you disappear to simply stay with your room. Descriptions of what social life is like at school, but not only within the school, but with detailed explanations of what it means in “magical society” to be part of a specific “enclave” within the school, or of the importance of belonging to one or another enclave and how these enclaves move internationally and relate to each other. 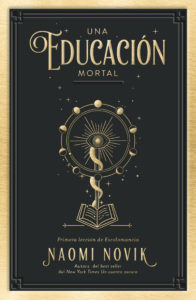 Naomi Novik’s “A deadly education” is a reading that fans readers of novels categorized as Young Adult within the fantasy genre will especially like. Writer Naomi Novik joins Umbriel’s catalogue with this ruthless, witty, and moving story. “Novik uses the iconography of our childhood – schools of magic, curses, cruel classmates, monsters – just to turn it around and create a great new story that will get you to believe in magic again,” emphasizes Pierce Brown, writer Renowned American in the genre of science fiction. It is indeed possible that some readers turn to this first volume of the trilogy in the hope of finding worlds similar in terms of “academic magic” to those created by JK Rowling in the Harry Potter saga, or even readers who have enjoyed the mythical fantastic Ursula K. Le Guin’s Earthsea saga’s will also pass through the same hope. But the truth is that if that is the perspective, the novel can dismantle the reader’s expectations a bit because the story told in this book contains non-academic and very dark nuances, which when analyzing the macabre relationship between characters, evil magic, the moments of “not being calm” within the school itself lived by the protagonist, one could speak of a novel that has nothing to do with the rest of the sagas discussed, it does not even come close to the magic of the wonderful worlds proposed by Tolkien and of which the author declares herself a fan. In “A deadly education” we move in unsafe environments of threatening magic, which the narrator describes with a certain irony, an irony that surprises in some cases due to its degree of acidity. However, it is these moments together with the presence of destructive magic that gives the text the agility and dynamism necessary to create a balance between the most descriptive part and the action part.

Ultimately Naomi Novik is discovered in “A deadly education” as a versatile and versatile writer, who with this first volume of the trilogy, has very correctly established the foundations of a new fantasy world to implement and not only that but also achieves draw well-defined and differentiated characters that manage to capture reading attention.
Naomi Novik is the acclaimed author of the Temerarie series and the award-winning novels A Dark Tale and A Frozen World. She is one of the founders of the Organization for Transformative Works and the Archive of Our Own. She lives in New York City with her family and six computers. Her book “A Deadly Education” has been nominated for the 2020 Goodreads Fantasy Award, and has also been an Outstanding Nomination for the 2021 Lodestar Award.